Headroom, floating point and why you should leave -6db on your mixing channels

There are a lot of different opinions when people discuss how much dB of headroom someone should leave on a channel, bus or master.

If you’re working in a DAW it doesn’t matter if your peaks hit -6, -3 or -1 dB, the results will be always the same and your audio won’t be destroyed.

When you have a sine wave on a mixing channel inside your DAW and you push that channel over 6db into the red and adjust the levels on the master bus -6dB you should have a perfect sine wave without any distortion. You can do this experiment with a spectrum analyzer. You can even go more extreme and load a gain plugin, add another +24db on the mixing channel, adjust the master -24dB and you will end with a perfect sinewave again

There are two different approaches when it comes to audio: Fixed point and floating point.
Fixed point is used in digital consoles and physical products with hardware chips while the other is used in DAWs and larger professional consoles

A “fixed point” at 32 bits provides up to 192db of headroom, so if you run your project at 24 bits (144db) you still have 8 extra bits for the noise floor region just as above. But you can still “theoretically” run into limitations.

In computing, floating-point arithmetic (FP) is arithmetic using formulaic representation of real numbers as an approximation so as to support a trade-off between range and precision. For this reason, floating-point computation is often found in systems which include very small and very large real numbers, which require fast processing times. A number is, in general, represented approximately to a fixed number of significant digits (the significand) and scaled using an exponent in some fixed base; the base for the scaling is normally two, ten, or sixteen.

So basically what it says is:

The first part of the number is called mantissa (2.33898) the second part is the exponent, which describes how far to move the decimal point –> floating point

This makes it easier for the computer to make mathematical operations, which also includes changing gain or volume of a digital signal in our audio world. The 32-bit floating point works by allocating 24 bits to the mantissa and 8 bits to the exponent.

Most DAWs process your audio in 32-bit floating point algorithms anyway, even if you run your projects at 24 bit. So in a “floating point” system, you could theoretically clip the signal to a higher amount of dB, restore it on the master fader and still have an intact sound source without any clipping or distortion.

Attention: Although this all sounds good in theory and you probably don’t need to leave -6 dB on your mixing channels because you can just turn down the master from 0 to -6 you need to be aware of two things:

– The mantissa is still restricted to 24 bits, which introduces limitations when mixing multiple audio sources
– We have many analog modeled plugins and the input levels are crucial on how the plugin or the modeling technology inside will behave. So if you take that sinewave, crank up the gain to 100db and run it through an analog modeled plugin, even by compensating these 100 dB on the master channel you end up with something completely different what you originally intended

So After this long explanation about floating point and how it allows you to crank up everything up to infinity, it is still recommended to use the -6 dB headroom rule.

Hi, I’m Drey Andersson, producer, engineer, guitarist and sound designer. Starting out at the age of 18 I always developed new skills and techniques in the audio field. From early youtube remixes back in 2007 that got millions of views, freelance work for indie artists up to 2018 where I won the SAMA Album Of The Year for Shekhina’s “Different” that I produced with my production partner Mae, I am always striving to deliver the best results. This also includes educating fellow producers and engineers about audio with my blog @themusicproducersblog

If you want more there is a free monthly “Bag Of Goodies” that I send out to all of my subscribers. Every month I try to come up with new interesting content for the audio community. For example, the January 2019 edition had an eBook on networking in the music scene written by me just as some new Serum sounds, royalty free melody samples, coupons and more 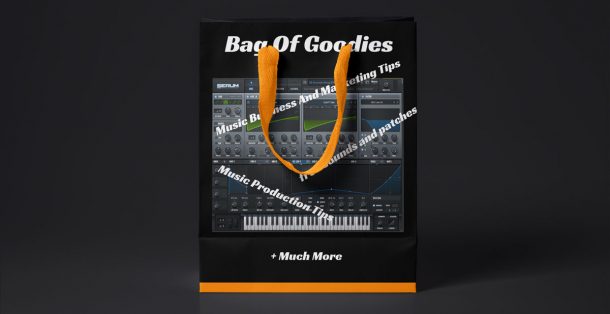 Thank you for subscribing. Please check your email and confirm the subscription.

NO SPAM! I hate it myself with a passion. Expect 1-3 emails a month with good value!